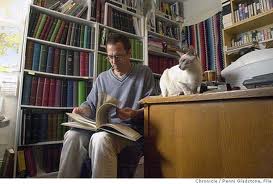 A scholarly man, a library, and a cat. Smells like History to me.

Historians have a pretty damn hard job. They have to sift through documents, journals, periodicals, legends, and myths; working like detectives to present a fair and balanced account of the past. Now picture this…a SURFING historian? Surfing history is chalk full of zany characters, unbelievable antics, and monumental sessions.. Before webcasts, Go Pro’s, and RED cameras, there wasn’t much to rely on for information but first-hand accounts, grainy footage, hearsay, whispers and mutterings. How in God’s name could someone compile all these stories and watershed moments in surfing history, especially considering all the swollen egos, bitter rivalries, and hazy memories of surfers who’ve bounced off the reef a few too many times or voluntarily fried their brains?

It’s a tough gig, but luckily for us we have a special individual devoted to decoding our surfing heritage, Mr. Matt Warshaw.   Warshaw has tasked himself with compiling surfing history into an online database, The Encyclopedia of Surfing.

From the Air-Drop, to Captain Good Vibes, Warshaw has toiled endlessly to allow the public a peek into everything surfing. As a fellow historian and surf scribe, I find this dedication and bounty of knowledge nothing short of amazing. Well, today is Matt’s birthday, so I thought of no better time to let him tell his story, and explain what compelled him to take on such a monumental task… 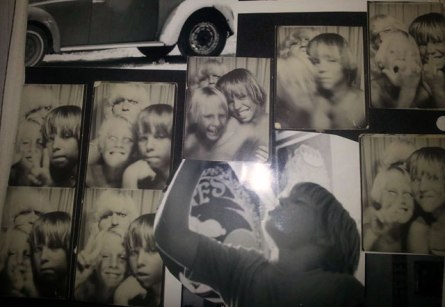 Can you tell me briefly how you were introduced to surfing? Did you ever compete, or was it strictly a passion?

My uncle pushed my brother and me across our swimming pool on his huge Hansen surfboard. This was in Tarzana, California, probably 1965. Uncle Dan was coolest person I knew, I already loved the water, so the hook was set. We just had to get out of the Valley, which we did a couple years later when my family moved to Venice. I got my first board in 1969.

I know that editing a magazine can be a tiresome and thankless job at times. It must have also been a thrill to have access to so many colorful characters…How would you describe your tenure at the helm of Surfer Magazine?

There was this long and amazing series of lucky breaks that helped get me to the editor’s chair. Just one thing after the other. On the other hand, I’m driven and ambitious and scheming, and made a lot of things happen as well. I was at SURFER for six years, and only in the last year or so, maybe the last 18 months, did I do anything that I’m proud of. Before that it was me learning the ropes in public, and most of what I did—my own writing anyway—I’m really deeply embarrassed about.

Another thing I remember was, when I got to SURFER, in 1985, everyone on staff was still using typewriters. I was the first person in the building to get a word processor, I think it was 1986. The year after that we all got word processors, and the art director got some primitive designing software, and some of the issues from the late ‘80s have this horrible sort of Nintendo-y design look.

On the plus side, I got to work with Derek Hynd, Jeff Divine, Matt George, Warren Bolster, Steve Pezman, Paul Holmes, and lots of other really talented people. I was only actually editor for maybe six months, but that position set up everything that followed in my work life. I’m really proud and honored to be a SURFER guy.

After Surfer, what was next on your agenda? Did you continue to freelance, or did you look at other avenues outside the realm of surfing to make ends meet?

After SURFER I went to UC Berkeley to finish college, and I funded that by selling my house in San Clemente and by sponging off my family. I did a bit of freelancing too. Actually I got some good assignments. I did a short piece for Esquire, and a couple things for Interview. Again, all those doors opened because of my skillful playing of the SURFER card. 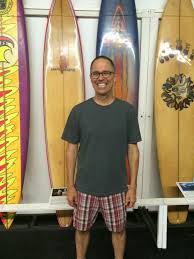 Warshaw and vestiges of the past

I’m sure that as Editor at Surfer you established ties with countless extraordinarily interesting cats…did these personalities and their stories compel you to start the Encyclopedia of Surfing–a sort of time capsule to bring all the legends and monumental events to the public in a familiar (Encyclopedia) and digestible format?

After college I mostly did articles for Surfer’s Journal and SURFER, then did a couple of books. One morning I made some random comment to my dad about knowing more about surfing than anybody in the world, and he said “So write an encyclopedia,” and a half-million words later it was done. The making of EOS is too boring to get into, but I’ll just say that I spent all of 2000 doing data entry prior to actually starting on the book. The whole year, loading up a Filemaker Pro database. You can’t spin that into anything gonzo. It’s drudgery, plain and simple.

What surfer doesn’t relish the tube. Matt, tucked in all cozy like

Expanding on the last question, was there any “Eureka!” moment when you realized the importance of saving these stories and compiling them for public consumption?

No, never. None of this ever seemed important in any kind of good-for-the-world sense. It gives me something to do. It makes use of this ridiculous among of very particular information I’ve got stored in my head and my various hard drives. I love the work. To a fault, almost. I wake up and can’t wait to start working. But never have I kidded myself into thinking that it’s important. It’s nice that I’ve been able to organize and archive and present the sport in some way. It is useful. Some of it is entertaining. But your surfing experience, my surfing experience—nobody’s surfing experience is affected by it. 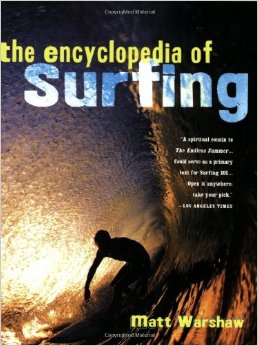 The book that started it all

How do you go about gathering information for your EOS entries? There are so many legends, showdowns/rivalries, design breakthrough, and epic stories to document–it must be a bit overwhelming!!

EOS will never be complete, and will never be finished. It’s a permanent work in progress. I knew that from the minute I started the book version, and 15 years later this remains the greatest comfort. I’m actually not overwhelmed. I do have a responsibility to surf history, but at some level what I do, what any historian or archivist does, is arbitrary. Especially with the website, where I need photos and video. There are entries in the book that aren’t on the website because I don’t have photos. There are huge holes on EOS. All I can do is post pages when they’re ready. And meanwhile fix all the typos, and update John John Florence’s page every month, and clown around endlessly on social media to try and get people to my site.

Surfers can have some pretty inflated egos…how do you deal with rejection and or avoidance while contacting sources for information? Has anyone called you out for something you’ve written about them? Also, have you ever had anyone call you out for not including them and their exploits/contributions in the EOS?

EOS is a 501c3 non-profit organization, and the entire “company” is me, working in my guest room for less money than I made as a surf shop clerk in 1983. When people call me out for whatever—it doesn’t happen that often, maybe once or twice a month—I throw my hands up and play the little man card. I can only do so much. I’ll get there when I can. Thanks for the patience. Which isn’t bullshit. But it’s also a way to deflect.

This must be a tough one to answer, but what has been the most enjoyable entry for you to include in the EOS thus far?

No single entry stands out. But what’s surprised me is much I enjoy flogging the site on Facebook and Twitter, and doing the EOS blog posts. I was late to social media, and was dragged there in chains, but once I signed on I really loved it. When I’m doing something for publication, a book or an article, I write the shit out of it, draft after draft after draft. Writing for the web has loosened me up. My writing is better for it. I’m learning from guys who are better at it than I am. I love my job because, even though I’ve been doing it for 30-something years, in one form or the other, I really seriously feel like I’m just now getting the hang of it.